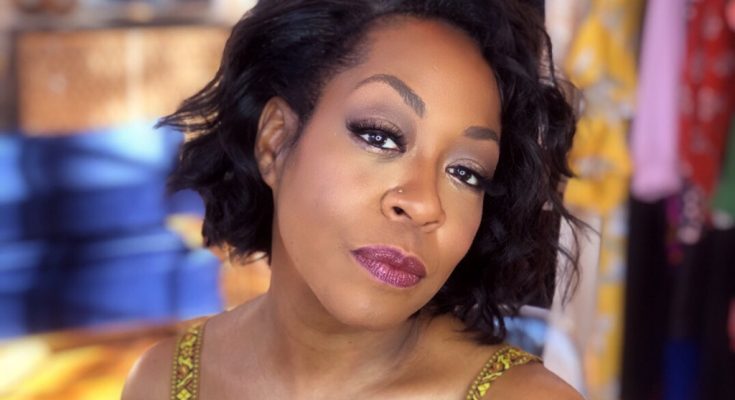 Tichina Arnold has a medium shoe size. Below is all you want to know about Tichina Arnold’s body measurements, and more!

Actress Tichina Arnold is best known for her role Pamela James on FOX’s sitcom Martin, and as Rochelle on the UPN/CW sitcom Everybody Hates Chris. She played Judi Mann in the TV Land original sitcom Happily Divorced. Tichina was born Tichina Rolanda Arnold on June 28, 1969 in Queens, New York, to a middle-class African-American family. Her mother, Diane Arnold, was a sanitation department worker while her father was a police officer. She has a sister, Zenay Arnold. From 2002 to 2007, she was in a relationship with music producer Carvin Haggins, with whom she had a daughter Alijah Kai Haggins in 2004. She was married to Lamon Brewster from 1992 to 1995, and Rico Hines from 2012 to 2016.

I took the role of Rochelle in ‘Everybody Hates Chris,’ and that was it. I was going to play mother roles all the time. Once you do one mother role, it’s always a trickle down effect.

A long time ago, when I was married, in the beginning it was bliss. I eloped after one month, and I married for security. I thought, ‘I finally met a man who loves God and comes from a great family. I’m working, I love God, and I’m out here in California by myself, and I’ve met this great man.’ So, I said yes. And we eloped.

I call myself taking control of a situation, but sometimes you really have to learn to humble yourself and to submit yourself. I’m not really good with submission, so that’s the part of marriage and relationships that I’ve found very hard to deal with.

When you’re single, you’re very independent. Very independent women raised me. We didn’t have a lot of male figures as the head of our household, so I got, and took on, a lot of that strong spirit from the matriarchs in my family.

I’m a realist, not a sugar coater. I believe in always letting people know what their obstacles are. And at the end of the day, I just want to be respected for my hard work.