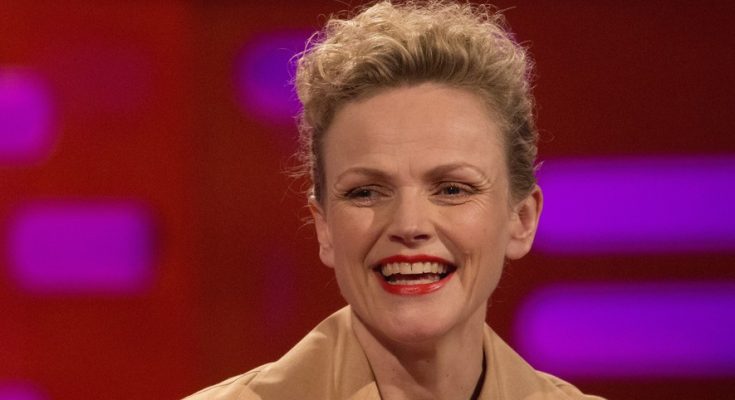 Maxine Peake’s measurements are seen below, including shoe size, height and weight!

Notable for her role as Elaine Mason in the 2014 film The Theory of Everything, she is perhaps best known for her television roles in the British series Shameless, Silk, dinnerladies and The Village.

Beginning in her early teens, she performed with the Octagon and Royal Exchange Youth Theatres. She later attended both the University of Salford and the Royal Academy of Dramatic Art.

Also a theater actress, she received a Manchester Theatre Award for her performance in a 2012 stage production of August Strindberg’s play Miss Julie. She joined the Communist Party in her early adulthood years and, in 2014, was the recipient of the Bolton Socialist Club’s “Outstanding Contribution to Socialism” award.

The daughter of Glynis and Brian Peake, she grew up in Westhoughton, England, and spent a portion of her teenage years in the care of her grandfather, who encouraged her artistic talents.

She and Colin Salmon were both in the cast of the 2008 film Clubbed.

I do, in a strange way, care deeply what people think.

It’s interesting when people say, ‘You always play strong women,’ because as far as I’m concerned, women are strong. I think that’s what women are. We have got that vulnerability, but we have got that strength. We are survivors.

When I’m not acting, I don’t feel like an actor.

At drama school, I was told, ‘Lay off the chips, or you’ll never play Juliet.’ Sometimes, in the stock room of the set of ‘Dinnerladies,’ I’d put away three or four Mars bars while waiting for a scene. Then, at 24, I lost five stone.

When I’m going to work, I often stop and wonder how I’ve got here. I don’t mean literally, but just thinking back to when I first had the idea of being an actress, it seemed so unreal, so unlikely. People like me just didn’t become actresses. Every new job I get comes as shock. It’s almost as if I’m waiting to be found out.