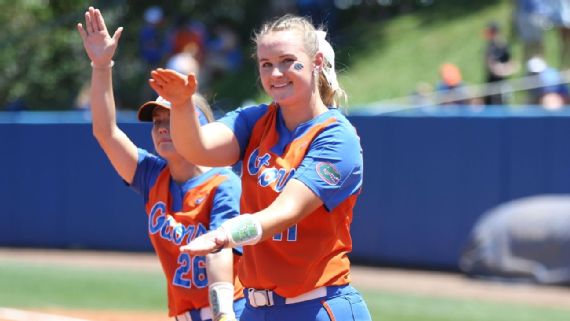 Kelly Barnhill’s measurements are seen below, including shoe size, height and weight!

Softball pitcher who rose to fame for her career playing for the Florida Gators between 2016-2019. She won the ESPY Award for Best Female College Athlete in 2017 before being named the NCAA Division I Softball Academic All-American of the Year in 2018.

She pitched 22 no-hitters throughout her high school career. She was named the Georgia Gatorade Player of the Year as well as USA Today’s Softball Player of the year in 2015.

She was selected first overall by the Chicago Bandits in the 2019 NPF Draft. She finished as a two-time SEC player of the year in 2017-2018, and won the 2018 WBSC Women’s World Championship.

Her parents’ names are Jeter and Susie.

She and Sydney Romero were both selected within the top five of the 2019 NPF Draft.