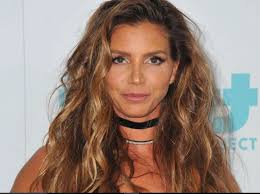 Short Bio
Charisma was born July 23, 1970 in Las Vegas, Nevada. Probably her most famous role is Cordelia Chase in Buffy the Vampire Slayer and Angel TV series. Young Carpenter was discovered by an agent while waiting tables in LA. Her first small role was in 1994 in Baywatch episode. She also appeared as Mord-Sith Triana in Legend of the Seeker and Kendall Casablancas in Veronica Mars.

You know, nothing is ever happily-ever-after. Ever.

Cause I was such a novice and thank God that Sarah was as seasoned as she was because she was really a great leader in that regard in the sense that she would communicate really well with the crew.

You can take the girl out of Vegas, but you can’t take the Vegas out of the girl.

Oh heck yeah, I totally would love to have a Phantom Dennis in real life.

When I was first starting out, and I was less established, I was really concerned about being typecast.