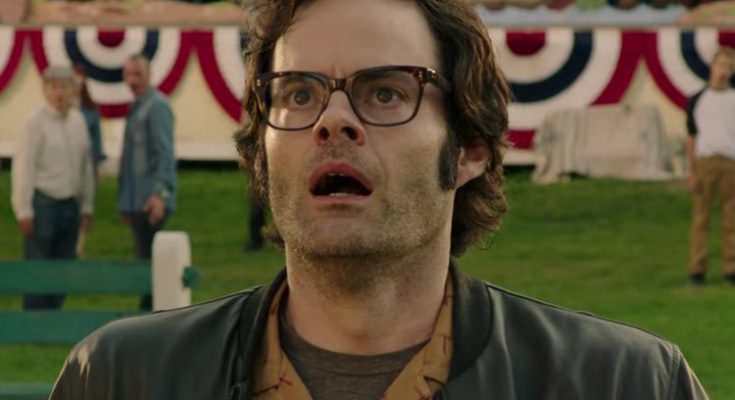 Bill Hader’s shoe size can be described as impressive. All his body statistics are here!

William Thomas Hader Jr. is an American actor, comedian and writer born on 7th June 1978. Bill is best recognized for his work on Saturday Night Live from 2005 to 2013 and for which he has also received three Emmy nominations. In 1999, Hader’s aspiration of becoming a filmmaker eventually led him to drop out of college and moved towards Los Angeles. Here he worked as production assistant while scouring the back pages of the Hollywood Reporter. Afterwards, Bill began attending comedy classes with friends for a change in 2003. It soon become a creative outlet and Hader formed a comedy group called Animals from the Future and eventually became a part of Saturday Night Live (SNL). Bill was hired as a featured player on SNL made his debut on the show in 2005 with his first role as a psychologist. During his tenure on SNL, his best known character was Stefon. Additionally, Hader as well starred in several films and television shows including Hot Rod, Paul, Men in Black 3 and Documentary Now!. Furthermore, he has also had lead voice roles in Inside Out and The Angry Birds Movie. In his personal life, Bill Hader has been married to writer-director Maggie Carey since 2006 and the couple has three children together.

I tried to get people at ‘South Park’ into ‘Downton Abbey,’ and it didn’t work. I think they were like, ‘Downton Abbey?’ What?’ And I kinda made a big plea in the writer’s room, like, ‘Guys, you should really watch it. It’s good. It’s addicting. My wife and I are obsessed with it.’

I remember being unbelievable bummed when ‘Freaks and Geeks’ was canceled.

I don’t believe in the term ‘guilty pleasure,’ because it implies I should feel ashamed for liking something. A real guilty pleasure would be, I don’t know, taking gratification in some stranger’s ghastly death or something – which I guess I do enjoy, because I read a ton of true crime.

My mom, dad, grandparents, we all do voices.